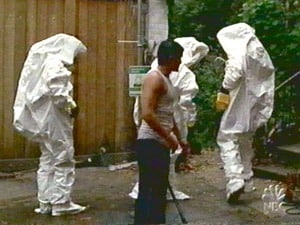 Application Description:
Fire Hazmat Gas Detectors for pre-Entry of Illegal Drug Laboratories and other Hazmat situations. Illegal drug labs don’t require much space and can be found in a variety of isolated places like apartments, cheap motels, mobile homes, farms, or even vehicles. Fumes from the lab can be toxic for long periods by penetrating surrounding furniture, carpet, and walls. The simple chemicals used to make illegal drugs are relatively harmless by themselves, but during the “cooking process” the mixture can be unstable giving off toxic fumes and creating a potentially flammable and explosive situation. Very dangerous chemicals are used which can generate toxic levels of phosphine and ammonia gas during the cooking process. In addition to being toxic, the chemicals are also flammable and explosive if exposed to an ignition source. To make matters worse, the post-manufacturing phase also generates a large volume of hazardous waste. Generally one pound of finished product will produce five to six pounds of hazardous fluids.

These conditions, combined with any booby traps used to protect the drug lab, can be extremely dangerous for any law enforcement agent or response team forced to enter the area. 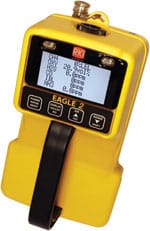 RKI offers the EAGLE 2 portable sample-drawing gas monitor that can simultaneously detect for phosphine and combustibles at either low ppm or % LEL levels. The instrument can also be configured with one to six different gases which can include combustibles, oxygen, carbon monoxide, phosphine, and ammonia just to name a few.

The EAGLE 2 is equipped with a superior catalytic sensor that makes it capable of monitoring ppm or % LEL levels of combustible gases. By simply pushing one glove friendly button, the display instantly changes from the % LEL range to the ppm range to detect trace amounts of combustible gases. The EAGLE 2 also has the capability of detecting a wide range of super toxic gases including phosphine and ammonia. Having a single portable instrument is a great advantage to a police officer, drug enforcement agent, or fire department in determining the toxicity or flammability of a drug lab before any personnel enters the area.

The Eagle 2 can also be equipped with a high-sensitivity photoionization detector (PID) for detection of volatile organic compounds (VOCs) at low levels. This function is useful for detection of solvents used in drug production, as well as for detection of accelerants used for arson.

We offer many versions of the EAGLE 2, which can be customized in terms of the sensors included, for law enforcement agencies. Listed below are some of the more common EAGLE 2 configurations which can be used. Please consult the factory for other combinations.